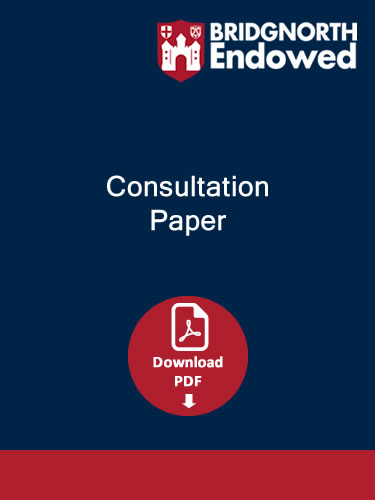 After a great deal of consideration, Bridgnorth Endowed School has taken the bold decision to launch a consultation on the proposed closure of its Sixth Form.

With more than two-thirds of 16-year-olds choosing to go out-of-town for further education, rather than try to buck the rising trend, the school is taking a proactive approach to embrace it.

Over the past few years, in a bid to understand the shift, Bridgnorth Endowed has canvassed its students for the reasons behind their decisions.

The overwhelming response has been that, although happy at the school, they are ready for a change after their GCSEs and are looking for greater depth and breadth of subjects available to them.

Shrewsbury Colleges Group and King Edward VI College in Stourbridge, for instance, are both popular destinations amongst Bridgnorth students and, as large post-16 education institutions, are able to offer school leavers staggering variety across A Level and vocational courses.

Students have also cited a “wider range of facilities” and “more social opportunities” as reasons for leaving town, plus “specialist 16-18 teaching” and “better preparation for going to university.”

The changing local picture sits against a national backdrop of reduced funding for post-16 education, which has fallen by over 20% since 2010, leaving providers to face financial squeeze.

In fact, the Department for Education recently reported that school sixth forms should have at least 200 pupils to be viable – a challenge for many school-based sixth forms around the country.

This puts a great deal of pressure on limited budgets and can often result in deflecting valuable resources away from younger students in the school.

As the smaller of the two schools in the town, Bridgnorth Endowed has therefore decided to take steps to focus on providing an outstanding secondary education for 11 to 16-year-olds and strengthen its commitment to raising aspirations and helping pupils achieve their full potential.

Fortunately, there is a wealth of high quality post-16 provision in the local area and careful consideration is being given to how Bridgnorth Endowed might develop closer relationships with educational institutions such as King Edward VI College in Stourbridge, Thomas Telford, and the colleges in Shrewsbury, Telford and Kidderminster.

Headteacher, Mr Worth, who recently visited the Principals at King Edward VI College, the Shrewsbury Colleges Group and Kidderminster College comments: “I’m hugely impressed with what’s on offer for our young people and I am delighted to report that these excellent institutions have expressed a keen interest to work with us. It’s exciting to consider how this will develop in the future.”

Links with local apprenticeship providers and other organisations will also be a key objective in the drive to offer students more choice, and, of course, the contact with Oldbury Wells School continues.

Oldbury Wells School has recently made the move to set up its ‘Bridgnorth Sixth Form’, which offers a range of A Levels and a number of new vocational courses to students wishing to remain in Bridgnorth to study.

Importantly, the current Bridgnorth Endowed Sixth Form students will continue with no changes or disruption to their studies and the school, which received a ‘Good’ rating from Ofsted earlier this year, is set for further improvement, under the steady leadership of Mr Worth.

“We have not taken this decision lightly but it’s what’s right for the school and for the town as a whole. With the majority of students looking for more diversity, it’s important for us to respond in the right way and fully prepare them for the next stage of their journey.”

“We strongly believe that by providing an excellent education up to the age of 16 with even greater support, we will enable students to get into the best universities and secure the most sought-after apprenticeships to build an exciting future for themselves.”

The period of consultation started on Monday 19th November and will run for six weeks. Consultation documents, including the school’s rationale and the data underpinning the decision, are available here →