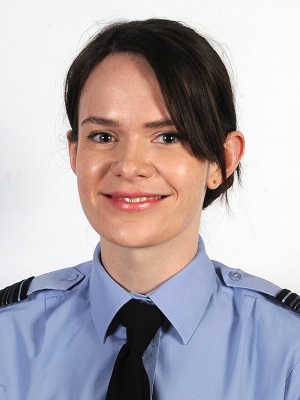 After leaving BES Sixth Form with my A Levels, I went to Royal Holloway College, University of London, to study Modern History. Whilst there, I attended a graduate recruitment event and, after speaking to representatives from the RAF and Royal Navy’s Fleet Air Arm, I realised that the challenge, adventure, lifestyle and opportunity of the Armed Forces could be the thing for me.

I gained my BA Honours in 2008 and waited to get onto an Officer and Aircrew Selection Course at RAF Cranwell. I was successful and commenced Initial Officer Training in 2009, graduating in 2010.

From there, I commenced my first Tour at HQ Air Command, before taking up posts at the Defence Medical Rehabilitation Centre Headley Court (a hospital for severely injured and wounded soldiers, sailors and airmen) and No 612 (County of Aberdeen) Squadron, where I was commended in the Queen’s Birthday Honours 2016. In 2016, I took up post as the Medical Support Officer (MSO) in the Aeromedical Evacuation Control Centre, before deploying to Baghdad, Iraq on Operation SHADER.

Here, I embedded into the US HQ as ‘Chief PECC’ – the Patient Evacuation team who run mission control for emergency medical evacuation from the battlefield. I fulfilled this role for 7 months during the Battle of Mosul, moving well over 1000 patients from across the coalition.

I’m a Medical Support Officer, which is essentially a specialist healthcare manager with a focus on deployed military operations (from planning to direct support). The Armed Forces have their own healthcare service that is designed to meet the unique challenges they face: from the environments they operate in to the types of injury they could sustain.

As an officer in the Royal Air Force, my specialisation is in the Air environment – specifically Aeromedical Evacuation and the Royal Air Force Medical Services run a Global Evacuation service on behalf of Defence and the UK Government. We also provide Forward and Tactical Aeromed capability on deployed operations, as well as Medical Treatment Facilities (field hospitals and smaller facilities).

As Officer Commanding Operations (OC Ops), my current role is in command of the RAF’s vanguard medical response Squadron “DARTS”, who are held at Very High Readiness to respond to incidents around the globe, be that conflict or humanitarian disaster.

The team consists of doctors, nurses, paramedics and medics with an incredibly high level of clinical and military training, which enables them to deliver medical support and care in the most challenging environments: from the back of a helicopter to the deck of a ship or in other austere environments.

If we’re not away on Ops or planning for Ops, then we’re training. This involves maintaining our skills, learning new ones and innovating to ensure that, when the time comes, we’re ready for anything.

My proudest work achievement is my work as Chief PECC in Iraq, from which I earned the UK Operational Service Medal for Op SHADER, as well as a US General Service Medal.

My proudest personal achievements are my children – two-year-old Henry and three-month-old Bea.

The friends I have from Bridgnorth Endowed School are ones that I have kept for life. There are senior HR professionals, teachers, doctors, nurses and midwives, historians and curators, auctioneers and business titans.

And we all have BES in common.

The RAF motto is ‘Through Adversity, to the Stars’ and I love it. It reminds me that even if something is hard, the end result is often worthy of my effort and that end result is also my reward. It also reminds me to aim high because, even if you don’t get exactly where you thought you would, you will still land amongst the stars.

I never imagined that I would join the RAF but it is the most amazing life of challenge, adventure, global travel and life-long friendships. It was definitely worth the effort.