Jordan is studying to be a paediatrician at the University of Liverpool. 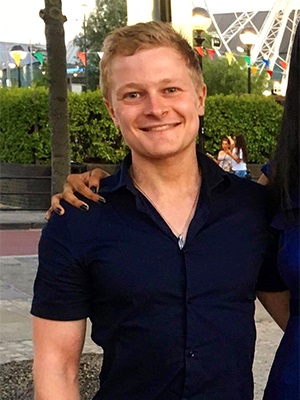 After I left Bridgnorth Endowed School, I went to King Edward VI College in Stourbridge to do A Levels in Biology, Chemistry and PE.

I'd wanted to be a doctor since primary school, so needed good grades. I had been very fortunate to have done well in my GCSEs, getting 11 A*s and 3 As, which put me in a good position and I had to get 3 As in my A Levels, which I knew would be difficult. Thankfully, I managed it and was accepted into the University of Liverpool Medical School, where I have been ever since.

My medical studies began in 2015 and the first two years were mainly lecture/seminar based. The third year was when it really started to feel like medical school. I was on placement in hospital every day, with just six weeks of lectures scattered throughout the year.

My days consisted of taking histories from patients, practicing examinations, practicing procedures, such as taking blood, putting in drips etc., and shadowing doctors, who taught us how to interpret investigations to make diagnoses and how to treat patients. This was across a range of specialities, from general practice to neurology, psychiatry to surgery and plenty more.

Medicine is a minimum five-year degree, so I am actually still at university. At the time of writing this (the start of 2019) I am in the fourth year, due to sit my final examinations this year and qualify as a doctor next year. I am then taking an extra year to do another degree (an MPhil - kind of a precursor to a PhD) in paediatric research.

My time these days is spent entirely in hospital, or sometimes general practice, rotating through many of the different medical specialities. Most of the day is spent with patients, with some focused teaching here and there.

I intend to become a paediatrician, so much of the extracurricular stuff I have done at university is geared towards that. I’ve had the opportunity to organise and present at paediatric conferences, contribute to research papers and I’m currently the treasurer of the Liverpool Paediatric Society.

It’s probably a bit of a cop out to say “getting into medical school” but it honestly is. The competition was really tough and I was doubting whether I was good enough right from the initial application, through to interviews and even up to getting a conditional offer. So, to finally get what I needed and be accepted is definitely the one that springs to mind.

I had so many great opportunities at Bridgnorth Endowed and they’re all things I look back fondly upon. I was able to do some really extravagant things such as go to China, which was a brilliant experience. But I look back on the “smaller” things, such as being a sports leader and a House Captain, just as fondly.

It’s a bit cliché to say that the highlights were the people, but it’s also true. The friends that I met during my time at BES are still some of my absolute closest friends and I know that they will be for life. I only usually get the chance to come back to Bridgnorth for a few days twice a year, but when I do, they’re still the first people I want to meet up with.

Leave your pride at the door. I remember throughout most of my teens being so conscious of what I wore, what I said, what I liked and – to a degree – it is completely normal to go to certain measures to look nice/be liked etc. But then you get to the first year of medical school and you realise that this is all tough enough as it is. We’re all muddling through it together, just trying to do the best we can, so we might as well make it easy for each other.

Don’t let past dictate future. And that goes for your own and your family’s. I’ve seen way more people on my course whose parents are doctors than I ever expected and there seems to be this thing in some degrees/walks of life where the status quo is “if your parents went to uni, you will too/if your parents didn’t go to uni, you won’t either”. But it’s a load of rubbish really. I’m the first person in my family to go to uni and it’s the same for many of my friends. Don’t let the perceived “advantage” that other people have, put you off from doing what you want.

You do you. Kind of a combination of the first two points. I know most of what I’ve talked about is coming from a more academic-focused career and that’s cool, because an academic-focused career is what I’ve always wanted/been better at. But if that isn’t you, then that’s also cool. We all have things we’re good and bad at, so don’t let being bad at one thing distract you from the thousand other things that you’re good at. There’s rarely just one path to get to where you want to be. Imagine if roads were like that – the traffic would be a nightmare!