Graham is a High Risk Advisor at the BBC and supports newsgathering teams reporting on major events in challenging regions all over the world. He has also built a company that provides security services to over 200 clients and employs 30 people. 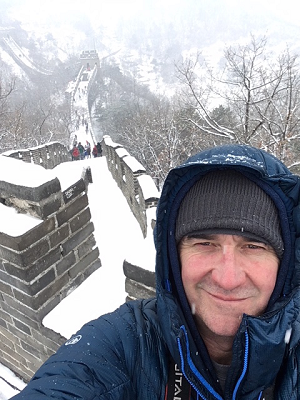 Although I’ve never been very academic (regrettably), I have always worked and have never been scared or shy of getting my hands dirty. I worked before and after school on a farm and as a paper boy, so the step into full-time employment after leaving school was not too daunting.

I worked at William Williams Builders Yard for a while and on a government scheme for a company in Low Town. It wasn’t until I saw an advertisement to join the British Army that I realised where my true calling lay.

The British Army ticked all the boxes for me – travel, fitness and opportunities alongside like-minded people. Of course, new adventures are unnerving, but you quickly settle into the military way of life and embrace all the prospects pushed your way. It isn’t all war-fighting, in fact, adventure training around the world, career courses and sport takes up most of your time. Alas, 22 years later, after several operational tours and rising to the rank of Warrant Officer, my time was done.

Whilst serving, I'd always been interested in the world of close protection, so as part of my resettlement, I completed both security and advanced medical training courses to bring me up to speed. Fortunately, I had friends working within the industry who recommended the best company to work for and route to take. After a successful interview, I joined Control Risk Group in Kirkuk, Iraq.

My task as part of a team of ex-servicemen was to escort expat oil workers to refineries, which they were repairing after the 2003 Gulf War. Iraq, at that time, was awash with insurgents who were opposed to the occupation of the US-led coalition. Our installations and convoys were attacked by a well-organised, funded militia on a regular basis. It was truly a case of jumping feet first into an industry where you need to be on top of your game and able to draw on previous experience and training.

I stayed in Iraq for a further three years, working on contracts in Basra, Erbil and Baghdad, before being appointment Director of Security for IHI Corporation in Algeria. This presented new challenges, managing the day-to-day security of a workforce of over 5000 staff, most of which were Japanese.

At that time, an Al-Qaida affiliate had launched itself in Northern Africa, which threatened not only the government of Algeria but the infrastructure and industrial zones. They had successfully targeted UN installations and threatened the international community with attacks and kidnaps.

My first task was to write a Cooperation Security Plan, where we could adopt Standard Operating Procedures for the safety of all of our staff. I had an excellent team, who ensured the procedures were incorporated into all routine activities and, during my tenure, there were no incidents or attacks, which is a credit to them.

In 2009, I was invited for an interview to join the BBC High Risk Team. Having never worked with the media, I was keen to understand the role and tasks I could be undertaking. I was interviewed by a board of former senior British Officers and team members, who put me through my paces for three hours, including being given scenarios and how I would deal with various situations. To date, it was the toughest interview I’d been through and I was left none the wiser as to whether I’d been successful.

A week later, I was called by the Head of High Risk to say I had been selected and had two days to sort out my equipment before deploying to the Baghdad Bureau in support of newsgathering tasks for six weeks. And so, the next adventure began.

Ten years later, I’m still on the BBC High Risk Team and still loving every minute of it. It has maintained the urge I have always had for adventure and challenging myself. I have supported BBC teams globally, in the most challenging of situations, and seen the changing times first-hand – from the Arab Spring in the Middle East and Northern Africa, to the plight of refugees in Syria and Central Africa. This has added perspective and enlightened me on the misery caused by conflict and poverty.

I have not only been privileged to support incredibly talented and brave journalists but, on the odd occasion, I’ve advised sports events such as F1, led Top Gear on their Middle Eastern Special, and looked after individuals, such as Matthew Pinsent on his Olympic Dreams reports from Afghanistan.

As of late, I spend a large part of my time covering South East Asia, advising bureaus, teams and reporters visiting the region and taking the lead on the coverage of major events, such as elections, natural disasters and terrorist activities.

Having been in a position to facilitate and support teams, who have brought the plight of atrocities to our screens, it brings a great deal of satisfaction, especially in recent times when IS had murdered and committed human rights abuses across the Middle East, to enable journalists to get to the most dangerous and challenging corners of their Caliphate and expose these things.

In addition to the BBC work, for the past six years, my youngest brother and I have created and built a security company called Clearview Security Ltd, which offers services such as CCTV installation and monitoring, security guards and mobile patrols. We provide these services to over 200 clients and employ 30 full-time staff in Shropshire.

I am incredibly proud to have seen and supported my two sons, who have grown into fantastic adults. My eldest is coming up to his ninth year as a Royal Marine Commando, and my youngest has recently graduated from the University of Bristol with a BA Honours in Business Management and started work as a Project Manager for a leading UK LED specialist based in Wiltshire.

A lot of fond memories looking back, with some inspiring teachers and lessons that ultimately helped me on my journey. My passion was always fitness, and although it has not always come easily, the support I was given by the staff motivated me to become better, which ultimately prepared me for the Armed Forces.

Work hard and follow your dreams. And remember, being compassionate will keep more doors open than anger.