Bryan is the first team manager at Bridgnorth Rugby Club and has been part of its meteoric rise to the National League. 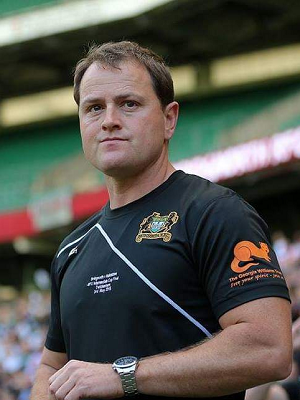 I used to say to my form teacher, Mrs Ashling, that one day I’d play rugby for England. Unfortunately, this didn’t happen but, after my PE teacher, Ron Oliver, got me playing at school and at the rugby club, I knew it was always going to be a huge part of my life.

Back then, I never dreamed that I would play such a massive part in Bridgnorth Rugby Club’s history or future.

I played there for many years, until I was injured at the age of 28 and had to stop. I then coached the U16s age group for three years and took them into the main club. Next, I was offered the assistant coach role, which I did for two years until I got the opportunity to be the club’s head coach.

In my time as Bridgnorth’s head coach, the club achieved the following:

During these years, I have made so many great friends and have had the best experiences, all because of rugby.

As first team manager at Bridgnorth Rugby Club, I’m responsible for the off-field admin of all the players and coaches. This includes making sure that players are registered to play for Bridgnorth each season and their contracts are up-to-date.

I am also involved in preparing the team for match days at training sessions, which we hold twice a week. Other duties range from ensuring that all the equipment needed for training and matches is available, to keeping an electronic log of who attends training, and filling in the Game Management System with the players selected for matches each week.

As well as being the first team manager, I have a dual role as the club’s video analyst. For this, I need to film and break down every game, using software to tag or code every event and edit clips of team and individual performances.

This information is then fed back to the players and coaches to help them analyse the matches and understand what to expect from the opposition in the week building up to a game. The data then needs to be stored electronically, so it can be easily found and used by the club.

Taking my home town to Twickenham – the home of Rugby – and having the home changing room. The cups and promotions are unbelievable achievements, but nothing will ever come close to walking out on the pitch at that stadium.

Naturally, sport was where I excelled at Bridgnorth Endowed and I proudly represented the school many times. From athletics, in particular the 100-metre sprint and discus event, to football – I would do anything. A standout memory was when we made it to the county rugby final at Newport but sadly lost!

However, being rugby captain in every year group and school sport head boy in my last year were the ultimate highlights.

If you really want something, then work hard at it. Take notice of those who offer help and make your own decisions from the information given. Never let your own self-doubts come between you and your destiny.